“As he stood next to me to take the photo, Jared whispered that he had something better for me to post about tonight…”

That’s right… we’re Engaged! While we were on vacation with both of our families, we finally did “the ring thing.” For those who do not know Jared and I did not get traditionally engaged. When we signed the ownership papers for OST we got engaged. We mutually decided that we wanted to spend the rest of our lives together and that despite the challenges we knew we would face- we were going to get married. Our families were happy for us but did not consider that a real engagement and wanted us to do what I like to call “the ring thing.” Over the past year and a half, Jared has been trying to propose, and almost every time he planned to I was either admitted into the hospital or had a severe subluxation/dislocation. He knew that I wanted us to get engaged before the new year began and you would think that I was suspecting it but I actually wasn’t that day. 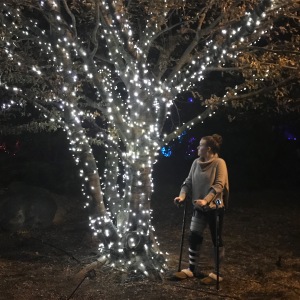 This was a picture I took this year at Tower Hill- this is an example of what I am talking about.

On the morning of we were spending a lazy day at his family’s house recovering from traveling and Christmas because my body gets fatigued easily and needs rest. His mom had low-key mentioned to me that she wanted us to go see a light display that was a lot like Tower Hill where Jared and I have done pictures before. I love christmas tree light displays and knew that if I had the morning and afternoon to rest I would be up for it; she played it so cool and made me believe that she could care less if we went or not, but thought I would enjoy it and it was my decision. I had no clue that this was a plan that had already been put in place. 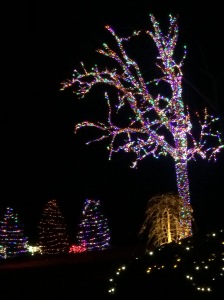 Later that night as it got closer we got ready to go and I knew we would get some cute photos because I had initially wanted to blog about the experience. So I did my makeup and barely did my hair because my shoulders were starting to fade (when I say fade I mean that the injection I had in my shoulder was wearing off so my mobility was becoming very limited. I knew that if I wanted to use crutches at the light display I couldn’t actually wash, blow dry, and straighten my hair, so I made the choice to just put it up in a bun.) I noticed that Jared put together a nice outfit to wear including his dress shoes, and I was surprised because he doesn’t always do that. As a nosy human being, I asked him why and he just said that he knows that I wanted to take some photos for the blog post and wanted to look nice. I was surprised but didn’t think anything of it because he made me assume that he was waiting to propose until both of our families were going to be together that week, so I was not expecting anything and brushed it off. 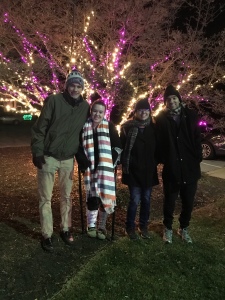 The start of the tour was a drive through and it was stunning. Huge oak trees were lit up and everything looked lovely. As the driving part of the tour ended we decided to drive through one more time to scope out where we wanted pictures. Immediately Jared pointed out this one tree at the edge of the parking lot. He asked me if I liked it and if I would want to do a picture in front of that tree. I said absolutely because 1. he was getting involved and 2. it was a beautiful tree. As we got out of the car, I started crutching  towards that tree and Jared suggested we get some other pictures first and get that tree at the end (because we have to pass it again anyways to get back to the car.) I agreed and we kept going. We got some pictures with his brother Bruce and his girlfriend Maggie, and also got some pictures alone.

Jared was full of suggestions and after we finished taking pictures in front of that set of trees, I asked him why he was so into this- because it was so out of character for him. He responded by saying, “I just know how important blogging and Instagram is to you and want you to have a good blog post.” I was very taken back and knew something was up, but I didn’t think he had the ring because I would have seen something in his pocket if he had it. I just thanked him for his willingness to understand how important things like this are to me in general, and also how nice it was to have him really helping me with the blog post pictures. (Don’t get me wrong he fully supports Living the Chronic Illness Life blog, he just isn’t super into taking pictures or being in lots of pictures.) 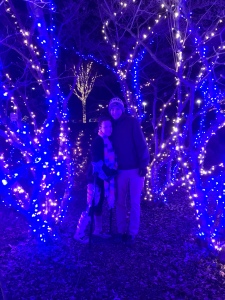 I saw these gorgeous blue trees and I suggested those and Jared was so into the pictures that I remember questioning if he would propose. I shoved it to the back of my mind because I was under the assumption he was going to wait until our families were together… and again I thought he didn’t have the ring. After those photos were done, we warmed up inside and I was looking through the photos that were taken. I saw one from the blue trees and was like, “that’s the one, that’s the one I want to use to put on Instagram and to announce the blog post is up.” He responded by saying that I should wait and see how the final pictures come out after we do the tree on the way back. At this point I was tired, it was less than 10 degrees outside, and my body had kind of hit it’s max. I told him that I wasn’t sure I wanted to, but he reminded me that we didn’t have a picture in front of a rainbow lit tree. Ultimately I was like, “okay one more picture.”

This was when was whispering in my ear..

As we got closer to the tree Jared said he was going to give his heavy jacket to his mom so we could get a picture with his slim Northface jacket on (which looked much better than the heavy jacket.) I was fine with that because I knew the picture would look better. As he stood next to me to take the photo, Jared whispered that he had something better for me to post about tonight, I quickly noticed Maggie and his mom had their cameras up, and before I could say or do anything Jared was down on one knee. I was shaking and started tearing up and he said that he had been waiting for such a long time to do this and asked me to marry him. Of course I said yes! I was crying so hard that he didn’t even hear me say yes. I took off my glove and he took off the promise ring he gave me years ago, and put on my engagement ring.

When he popped the question!

Cars going by yelled congratulations to us and it was so exciting. I kid you not, as soon as I saw him get down on one knee it wasn’t even cold outside anymore. I felt like I could have stayed out there for hours because the cold didn’t even phase me and it felt warm outside.

After I was told how it was planned and I found out that I didn’t see the ring in his pocket because it was under his jacket. I would also like to add a funny story about the color of my nails. Since November, I knew that a proposal was coming and I determined to get engaged in this color. I got gel nails in this color 3 times and had this color on for 6 weeks but it worked out in the end!

The next day we celebrated with my family at Hershey World, and yes I am aware I am allergic to chocolate and cannot ingest it, but nothing beats freshly made white chocolate Reese’s! My mom had known that this was happening and even brought props! It was a great day and it was nice to celebrate with both families.

So that’s it. We are officially engaged, and now on the task to book a venue before I go back into the OR on January 18th. I don’t know if that will happen or not but that’s the goal! We are planning to get married either this April or May- it all depends on what dates are still available at the venues we are looking into. We are so excited to start this journey and I can’t wait to share this wedding planning process with you!

Happy #tendinglisttuesday 🎉
This is the statement I want to start off with as we kick off #EDSawarenessmonth
Living with open hands is hard, but God does some of His best work through open hands. Imagine if we never let confetti go - we would never see the full beauty of it.
I was thinking about how important this Saturday is and what it represents.
Last night, we completed the first quarter of the Grace + Goals Accountability Collective and I am beyond grateful and so encouraged. I haven’t taken a leap of faith in quite a while because I couldn’t bear the thought of hoping for something and being disappointed.
Lean into this season; that is what I desire to do this quarter.

Thanks for putting us in the top 100 Chronic Illness Blogs!