I know this blog has been long overdue but now that I have all of the pictures I am ready to share the ups and downs of getting a brace fitting dress. Now it may be hard to believe, but yes we did ripped apart my wedding dress. Let’s go back to the beginning so you can see the whole process. 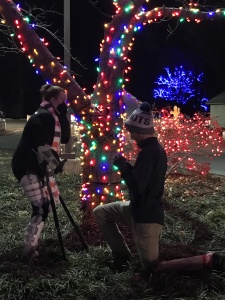 When he popped the question!

On December 27, 2017 Jared proposed to me with a ring (to read more about how he initially proposed in 2016 you can find that here) in PA while we were visiting his family. My family also happened to be in PA on vacation so we got to celebrate with them too! Let the wedding planning begin! 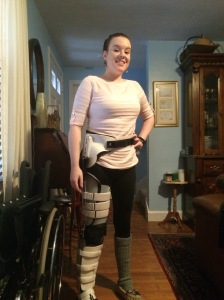 Once we got home from our trip our first goal was to find a venue which we found 2 days before I was going into surgery! After two weeks of recovering and being out of surgery I knew that we had to start searching for a dress. The trouble with finding a dress was that is had to be able to work with my HKAFO brace. This would require a two piece dress. Two piece dresses are slowly becoming more popular, but there are very few designers working that trend which makes it expensive and leaves you with limited options. I started looking on Etsy and found a shop that made a bodysuit and then a skirt- it was perfect! A bodysuit is basically a leotard, then I would put my brace on over it, and then the skirt. I called up the designer and she told me that before I committed to her gown she wanted me to look t fabric at a fabric store and try on some dresses (even though I could not obviously have any other those dresses it was just for me to get an idea.)

The next thing on my mind was looking at dresses and bridesmaids dresses, so I called up my best friend and wanted to have her try on the bridesmaid dress that I had picked. About a week and a half after my call with the designer, off to David’s Bridal we went! As soon as we walked in, I saw this Vera Wang gown with a full skirt like what I wanted. I just breezed past it though so that Maura and I could confirm that I loved the bridesmaid dresses so everyone could get theirs.

As I started talking with Jackie, the manager, she asked is even with my situation if I wanted to try on some gowns. I explained that I would love to but wouldn’t be buying a gown here. She was so kind and understood my situation, so I asked to try on that Vera Wang Gown. We tried on a huge dress because my brace makes my size 2/4 waist into a 16/18 waist (that’s why it is not form fitting on me.) I fell in love with most of it but loved the skirt most of all. I cried as it was the first time that I felt like a real bride. I couldn’t wait to call the seamstress.

Shortly after I called the seamstresses and she quickly dismissed me and said she had too many clients and could not make my dress. I begged her over the phone reminding her that I had to find a two piece dress or I wouldn’t be able to wear a dress on my wedding day. She said she hoped I could find something else and briskly hung up the phone. I was heartbroken. I cried for at least 2 days straight.

Then everything changed. Maura remembered that while I was trying on the Vera Wang that we met a seamstress there who said that she had split that dress into two for a bride that was pregnant. I immediately called up this seamstress and explained what had happened. She asked if my mom and I could come in tomorrow and said she only had 4 dresses that she could split. As grateful as I was to have some sort of a solution I couldn’t stop crying as I feared I would have to get a dress that I didn’t like or wouldn’t fit me well.

As soon as we got to the salon my mother gravitated to an Oleg Cassini gown and said, “I think this is going to be your dress.” Due to my stubborn nature and love for the Vera Wang I dismissed what she said. We detached the top part of my hip brace so I could try on the dresses to my actual torso and then see what the brace would look like over the dress. Ultimately it came down to the two we thought- the Oleg Cassini and the Vera Wang.

Both were beautiful but the more and more I looked at them, the Oleg Cassini gown felt like it was meant to be my dress.

Most importantly I felt like my brace was meant to go with it. I did not feel that it stuck out, almost as if it was meant to belong there.  Then we tried to raise the skirt up to imagine it sitting on the hips of the brace like the skirt normally would on someones actual hips. 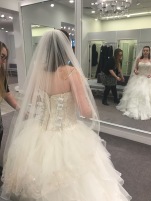 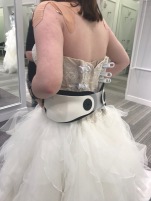 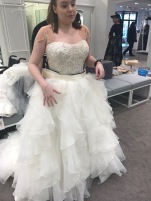 This was it. No compromising. No broken hearts. No handicap. This was my dress without a doubt. Now here is where the fun begins.. the dress gets ripped apart… in next weeks blog post! Can you guess how we did it?

Also thank you mom for believing in me, this dress, and my vision and to Jared for the dress itself.

One thought on “We ripped apart my dress! Part One”

Happy #tendinglisttuesday 🎉
This is the statement I want to start off with as we kick off #EDSawarenessmonth
Living with open hands is hard, but God does some of His best work through open hands. Imagine if we never let confetti go - we would never see the full beauty of it.
I was thinking about how important this Saturday is and what it represents.
Last night, we completed the first quarter of the Grace + Goals Accountability Collective and I am beyond grateful and so encouraged. I haven’t taken a leap of faith in quite a while because I couldn’t bear the thought of hoping for something and being disappointed.
Lean into this season; that is what I desire to do this quarter.

Thanks for putting us in the top 100 Chronic Illness Blogs!